I became a Mama.

Yes-it's been exactly a year since my last post.

I certainly hope I don't become a once a year blogger-but what are you going to do?  So-let's recap the year a little.

Josie celebrated her 6th birthday in June and had a great party with a pinata! 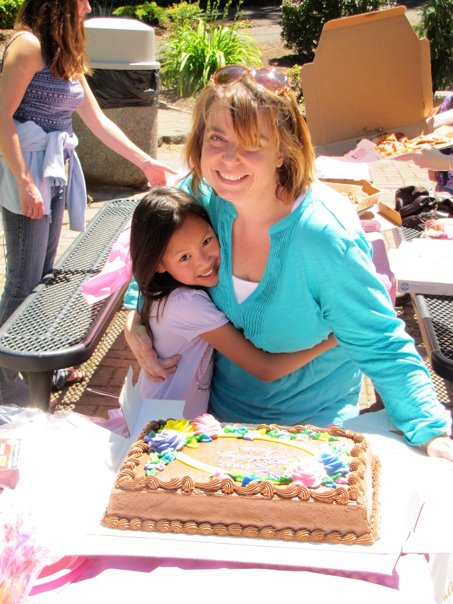 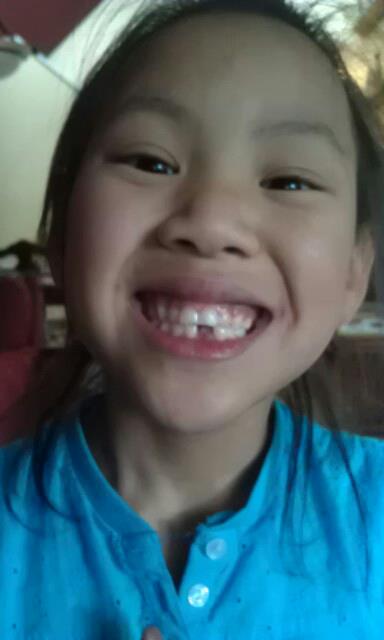 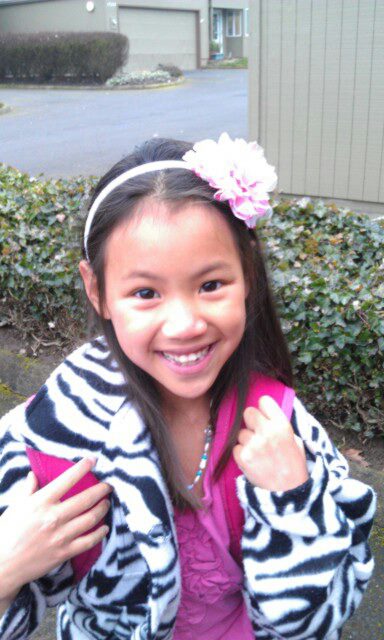 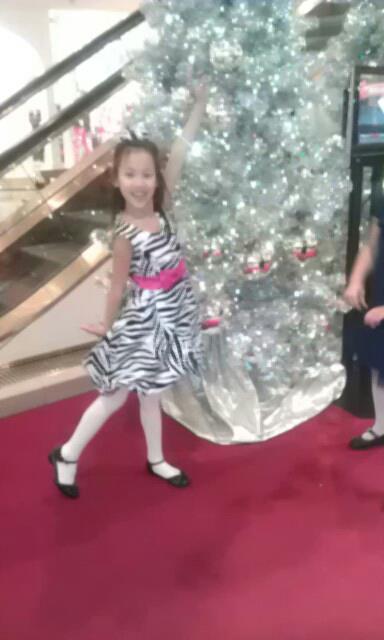 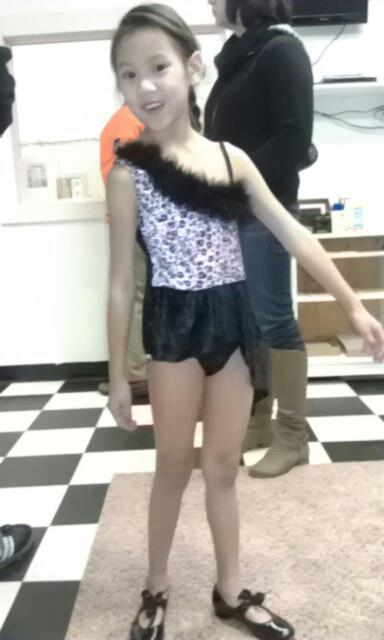 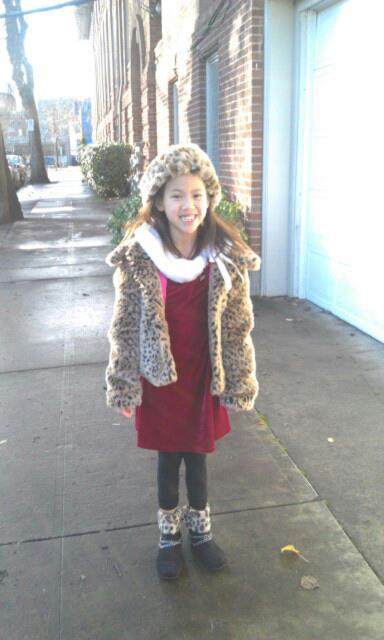 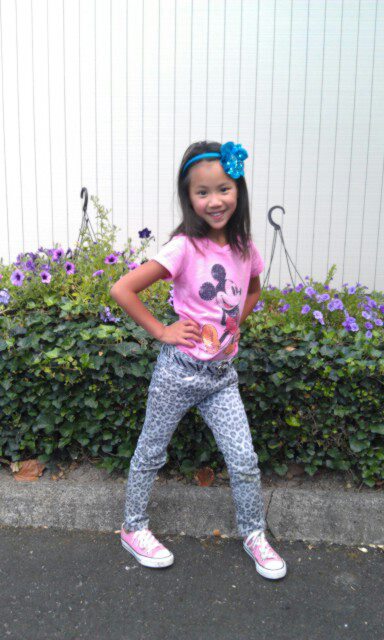 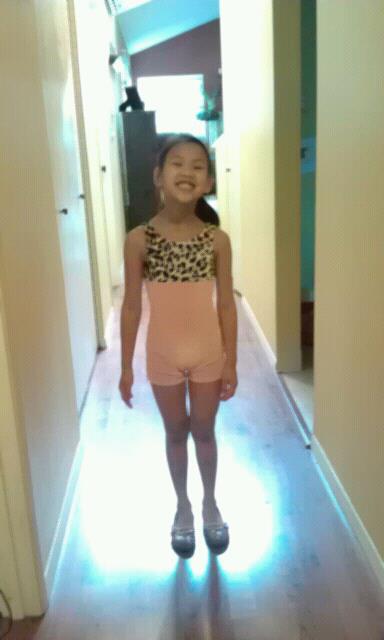 Josie started first grade and loves her teacher.  While the neighbor girl isn't in her class (bummer!), her best friend from kindergarten is, so all is right with the world.   She likes school, she DOESN'T like homework.  Needless to say-neither do I.  The 45 minutes before dinner are very trying times.  But, she's progressing great in reading and math and needless to say, she excels socially.  :)  She plays My Little Pony with her friends at recess and apparently chases one particular little boy.  She says he likes her, but she doesn't like him.  Hmmmm . . .

We adopted two orange kitties (Katy Perry and Cheeto) in October.   I know she was hoping for a kitty that would constantly be in her lap or sleep with her but she's so boisterous she scares them.  Cheeto is coming around and I suspect as she gets older and more gentle-they'll be buds.  But Katy is very wary . . . .she's the skittish one of the two-very much like Roxie used to be.  Sweet Toby died about two months after we adopted the kittens after a sudden but thankfully brief (and unknown) illness.  That was hard on all of us (especially me!) and antisocial Roxie has become more social and cuddly with Josie (and everyone, really) since.   She misses her brother and after a while, accepted  Katy and Cheeto-burrito.  Though when they're chasing each other and pouncing she gives me the stink-eye ..  ..


She dressed up as Dorothy for Halloween and we also went to a party where I was the Wicked Witch of the West.  Later on this year, we dressed up again to go to a Wizard of Oz sing-a-long movie event at the Clinton St Theater which was a blast! 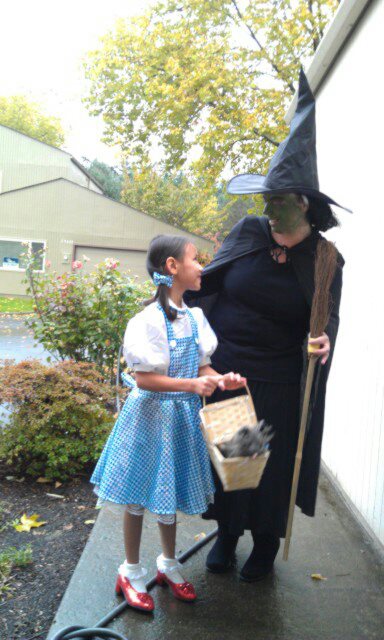 We had a great Christmas with the family and more ponies were to be had.  The whole Pony obsession doesn't seem to be subsiding .. . . .and she got the desired Dreamlight and Stompeez she'd been begging for (thank you infomercials .. .).


It was a big year of traveling for us.  In January my parents took the whole family to Kauai.   We had so much fun.  We stayed in an incredible condo with fantastic view.  We did a family tubing trip and spent (of course) a lot of time at the beach and pool.  Josie spent a lot of time with her cousins in the pool and digging holes on the beach.  She's quite the water baby.  I need to do a separate post with pics .. . .


Then for Spring Break we went to Disney World-our first time there.   That trip also deserves an entire post to itself.

The funniest "Josie" thing this year is her "long eyes".   This child of mine alternates between trying to convince me she needs glasses (she even tried to flunk the school eye exam).  I took her to the eye doctor last year in case I was wrong about her faking, but no, she has perfect vision and the doctor looked her right in the eyes and told her she didn't need glasses and he didn't want to see her again for 3 years.   She wasn't happy so I bought her some fashion eyeglasses at Claire's which lasted about 3 days before she broke them.   Anyway-when she's not faking blindness, she's boasting about her great vision (yes, I know.  This is life with the drama queen.)    She claims she can see the ocean from our house with her "looong eyes" or "looong eyeballs".  (I really should get her on video saying this-it's hilarious the way she says it).   She could see our house from Hawaii.   She can see through walls.  She sometimes extends this superpower to other senses (I can hear that with my looong ears .. .).


Josie is still taking tap and ballet class and while not particularly proficient, she LOVES to perform!  She also started taking piano lessons and is doing pretty well, as long as I get her to practice which she doesn't care for but likes better than homework.  She recently got to play both hands together briefly and thought that was the coolest thing ever.   I'm looking forward to her first recital. 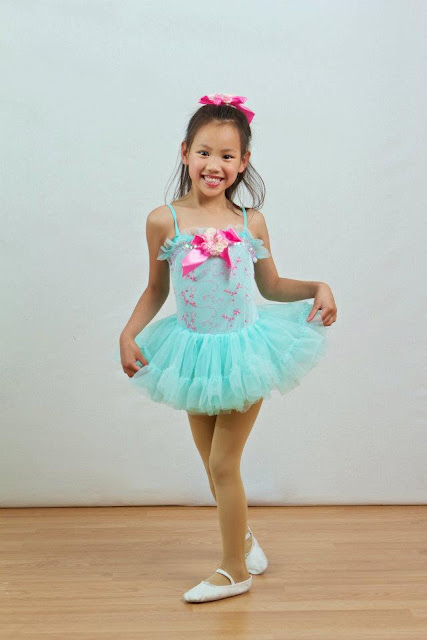 Josie pretty much lives for the weekends and for playdates and sleepovers.  And streaming Netflix.  :)  She's been moving from one cartoon obsession to the next-Johnny Test, Super Mario Bros (!!), Adventure Time (ugh!), MLP (of course) and the longest running favorite, Scooby Doo which I heartily approve of as long as it's not the ones with Scrappy Doo.


Grandpa Joe is 92 (or is it 93?  I forget) and he still comes over to watch her on Thursday nights.  They play Candyland, cards, and now Junior Monopoly and then she subjects him to Wii games or Netflix while hogging the popcorn bowl.   She looks forward to him coming over.  Their relationship is really special and quite adorable.

Even though Josie is full of drama she is also incredibly sweet and thoughtful.  She is constantly writing me little love notes and leaving them for me to find.  And if she gets in trouble and gets sent to her room-I know in 10 minutes or so, she'll appear all teary holding a little apology note. 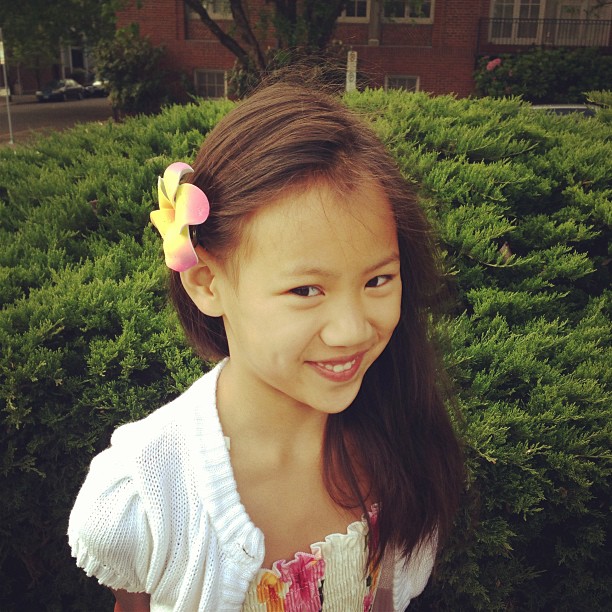 
I have been horrible with the blog this year.  Facebook is just so easy and quick--but certainly not as good for preserving memories.  Or maybe it will be.  Time will tell.  This has been a wonderful year for Josie.  She started Kindergarten.

She dressed up as Jasmine for Halloween.

She had a fantastic Christmas.  Or as I like to call it-the Christmas that My Little Pony exploded all over my home. 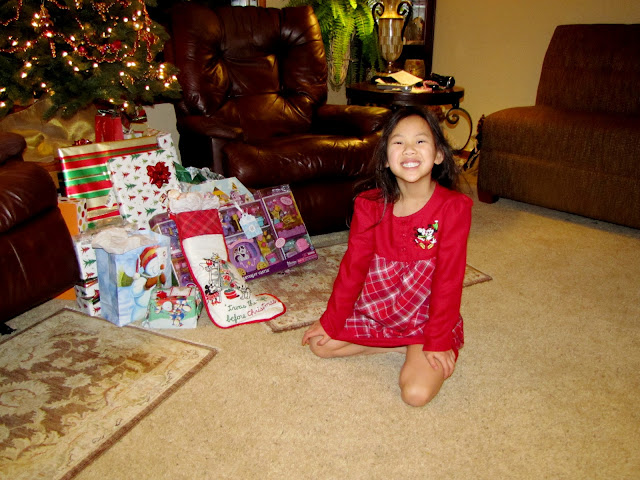 
She cut her hair.

She perfected her sassy pose:

Of course, some things never change.  She still thinks "underwear" is the funniest word ever.  She loves pop songs by Katy Perry, Lady Gaga, and Kelly Clarkson.  She thinks Party Rock Anthem is actually, "Polly Pockets In The House, Tonight . . . ."  She LOVES to sing-but the words are ALWAYS wrong.

Remember this photo?  This was last year at this time when we went to Kindergarten Round Up.  Her new outfit was a little big on her then . . .

Happy Family Day, Josie-Bean!  I am one proud and lucky Mama!
Posted by Jules at 6:49 AM 6 comments:


I was so excited to blow Josie's mind when I told her we were leaving for the airport to go to Disneyland.  But she pretty much took it in stride.  Which just goes to prove my theory-she likes to squash all my fun.  Don't get me wrong-she was happy and excited-just didn't seem to be all that surprised.

So-she doesn't like to wait.  And we were going to Disneyland.  In June.  Yeah.  Fun times.

Josie is not the best traveler-she's so caught up in what's GOING to happen that she can't seem to enjoy the moment she's in.  She couldn't enjoy the flight, the anticipation, the Starbucks hot chocolate . . . .because she just wanted to get there.

And when we did get there?  Holy cow-she drove me and mom nuts!  Whatever ride/atttraction we were waiting in line for-she wanted to be in line for 10 other ones.  She didn't seem to understand that we would be there for 5 days, we would get to (mostly) everything.  RELAX!  We threatened to put her with the hotel babysitting service at one point so we could enjoy ourselves without the whining and complaining.

But finally after about a day and a half-she did relax and get into the groove of the whole thing.  Josie and I would hit the early entry while mom enjoyed her coffee and do as much as we could.  We'd join mom later for lunch and rides and then head back to the hotel for rest and swimming.  The D!sne$land Hotel just opened a new little waterpark (they're still remodeling the other pool) and Josie loved it. Me too-I was following her around until another parent clued me in the the SEVEN lifeguards in the area and told me to sit down and relax!  So I did.  But she did talk me into going down the waterslide . . . .

We waited so late in the spring to go because the new Little Mermaid ride opened on June 4th and we couldn't miss that!  The new Star Tours opened on the same day so it got a little nuts.  But we had gotten some special (hard won, I tell you) Fastpasses from the hotel so we didn't have to wait in line for the Little Mermaid.  We decided to pass on Star Tours (some people were waiting 4 hrs-crazy!) since Josie had developed an aversion to any ride that was in the dark.  The Matterhorn was probably not such a great idea our first day there . . . . .  We did get her on Pirates though and she really liked it.  But oh boy, get that girl on roller coasters, river rapid rides and the (surprising freaky) ferris wheel and she's a happy camper!  She loves the thrill rides! Yay!  Unfortunately she was too short for the big roller coaster and the Big Thunder Mountain was closed.

We saw the World of Color (which was, just okay . . .considering the hassle of getting tickets/viewing spot).  I probably wouldn't do it again.  I hate crowds so something has to be pretty amazing for me to deal with craziness.

We also had a couple of character meals-Goofy's Kitchen and Ariel's Grotto.  And some meet-n-greet with characters-the Princess Faire, Tinkerbell, and Rapunzel.

Josie's favorite ride (and I say this because we went on it now fewer than 5 times-once 3 times back to back since there was no line) was the Monster's Inc ride.  Why?  No clue-it's cute and all but I refused to go on it a 6th time!  We also went twice on It's a Small World-twice is my limit on that ride.  Funny how I love it the first time and the second time seems HOURS long . .   .

The new Little Mermaid ride is cute-you're basically going through scenes from the movie while you sit in your little clamshell.  What's funny is the clamshells go through on a conveyor belt and they're pretty quick.  They don't stop so you can get on-you have to practically run to catch up and leap onto one.  I'm sure the attendents can stop or slow it down.  But they didn't.  So there were sometimes empty shells because folks couldn't jump in in time. 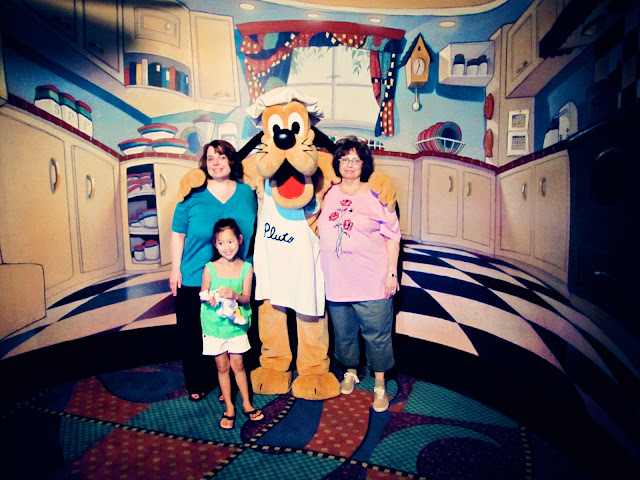 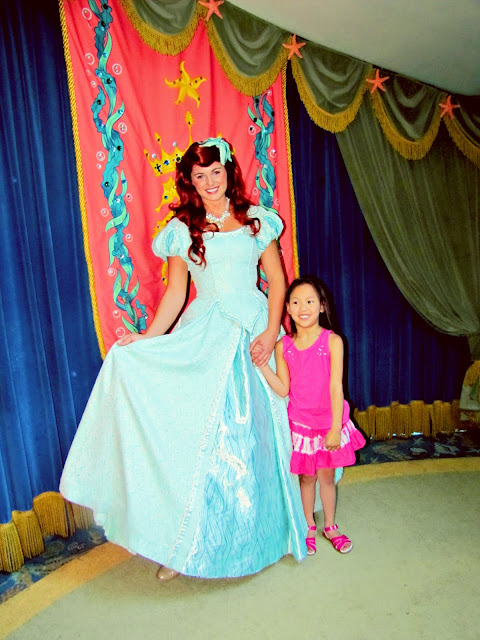 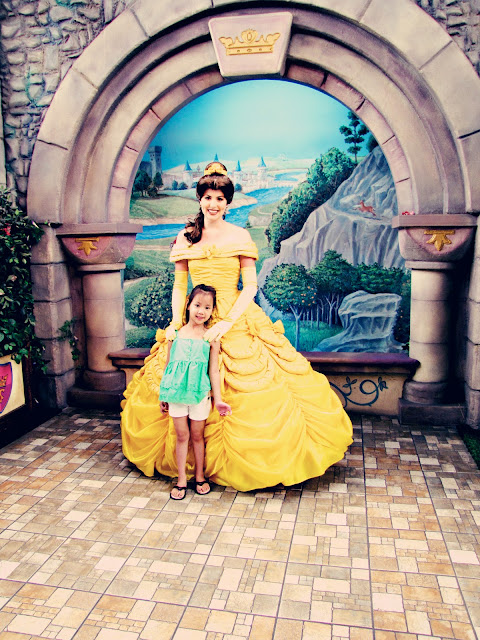 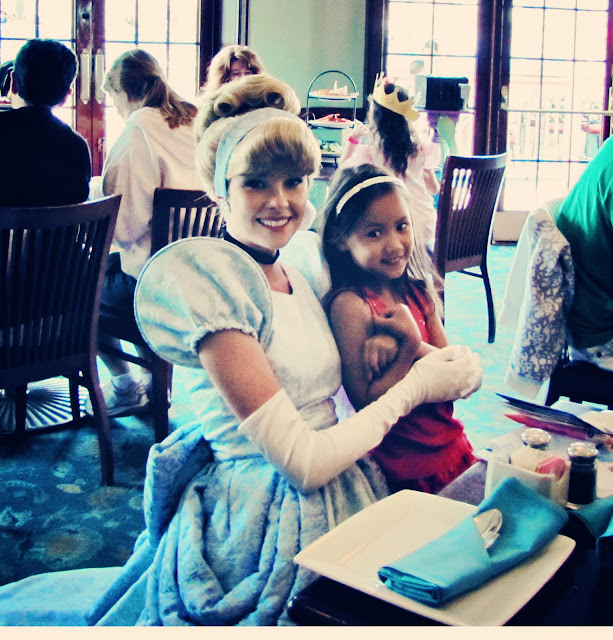 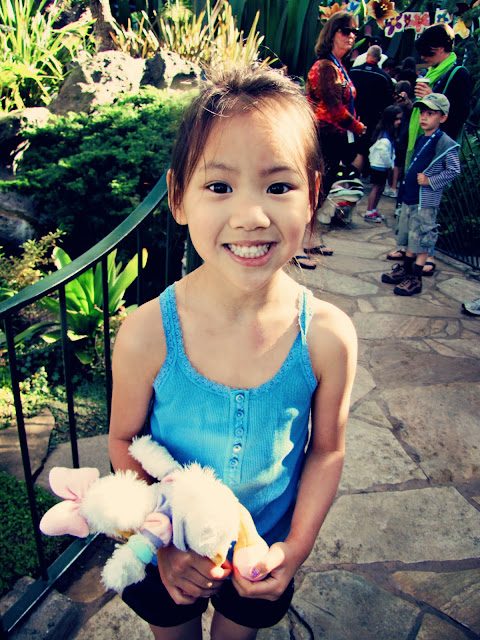 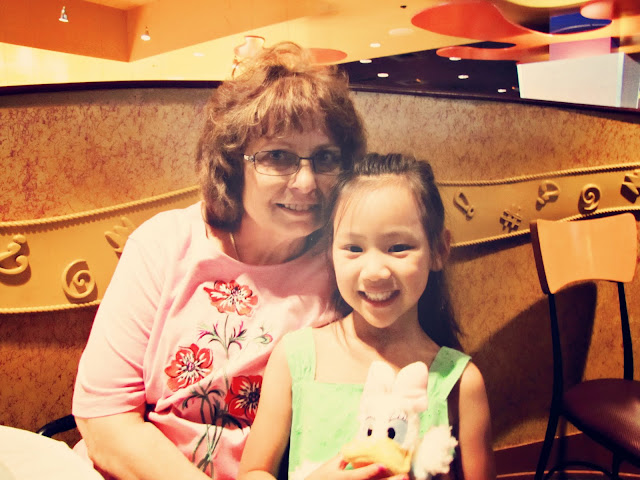 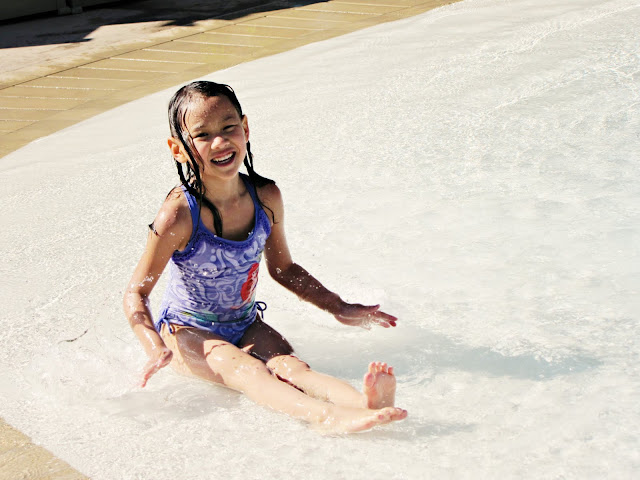 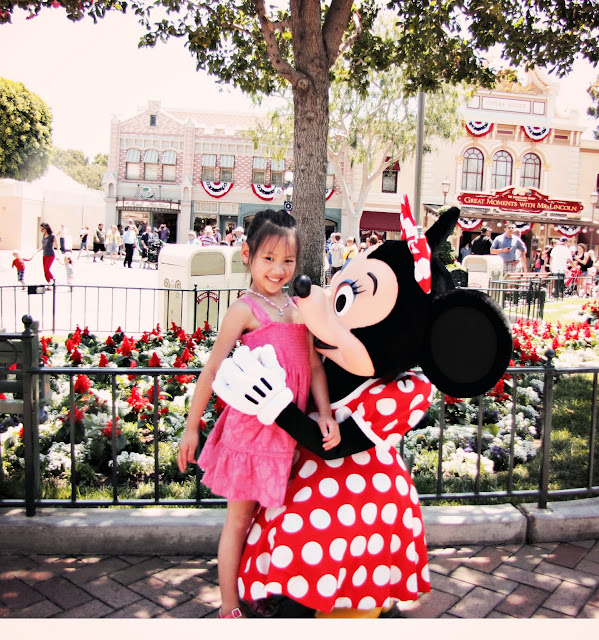 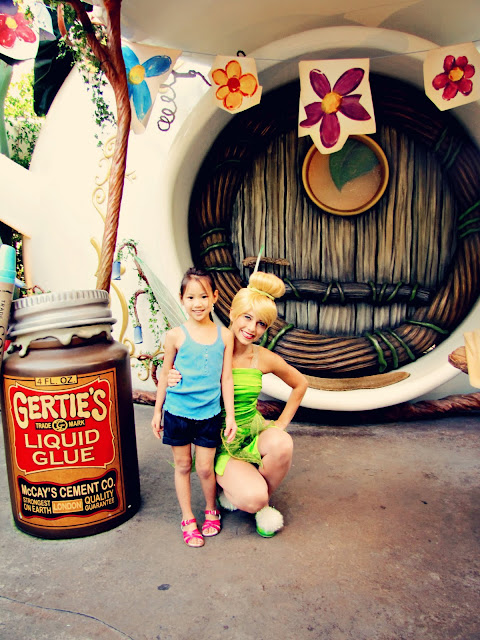 Just asked Josie if she was hungry and she said she was.  Went over a few options and when I asked her if she wanted a tortilla with cheese she said, "No!  I want a little PIZZA!"

Okey doke-got out the tortillas, cheese, turkey pepperonis and pizza sauce (that's how we roll . . . .).  She pulled up a stool cuz she wanted to make it.  She pointed at the jar of sauce and said she didn't want that.  OK.  She pointed at the pepperoni and said she didn't want that.  Alrighty then.  Then-she said she wanted the other cheese (as in, not the mozzarella I had out).  "Which one?"  She picked out the bag of shredded Mexican cheese blend.

"So-you want a tortilla with cheese, then!"

This is my favorite picture of my niece. 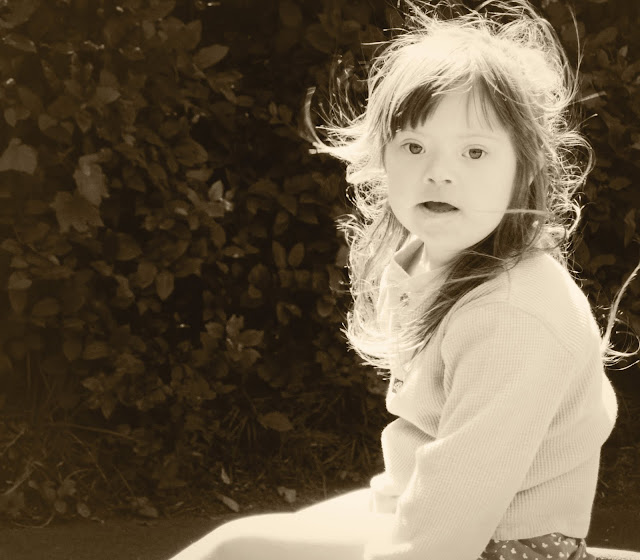